My Books
While I’ve been writing since I was a child, it was a long and winding path to becoming a children’s book author, with fulfilling stops along the way in technology, coaching, and education. But I can honestly say that being a writer is the most rewarding thing I've done
I have some exciting news! My second picture book, titled Does a Bulldozer Have a Butt? and illustrated by K-Fai Steele was released from Chronicle Books on May 24th! And while silly, rhyming books don't usually get much love in editorial reviews, we are excited at all the positive feedback, including a STARRED review from Publishers Weekly!
​As you may have guessed by the title, this book could not be further removed from my debut. While I hope The Longest Letsgoboy touches readers’ hearts, this one is meant to tickle their funny bones. Illustrated by K-Fai Steele, it’s a rhyming romp that takes a lighthearted look at a most unlikely assortment of, well, butts. Along the way, we learn that each butt, from a zombie’s to a firefly’s, has its own distinctive, and distinctively humorous, quality!

This story was inspired by, of all people, my young child. While they are now a teen (which shows how slow this process can be), when they were only 4 years old, we were sitting behind a school bus at a stop light. They peeked out from their car seat, pointed, and excitedly exclaimed, “Look, Daddy, that school bus has a butt!” Indeed it did, and I began writing the story, and looking for butts in peculiar places, that day.

You can order Does a Bulldozer Have a Butt? here:
And my debut picture book, The Longest Letsgoboy, illustrated by the amazing Cátia Chien, has been named the Margaret Wise Brown Honor Book for 2021 and has won the 2021 Crystal Kite Award, an honor voted on my fellow authors and illustrators, for the Southeast Region of the Society of Children's Book Writers and Illustrators (SCBWI).

In addition, we are so fortunate to have received FOUR starred editorial reviews for this book!​ 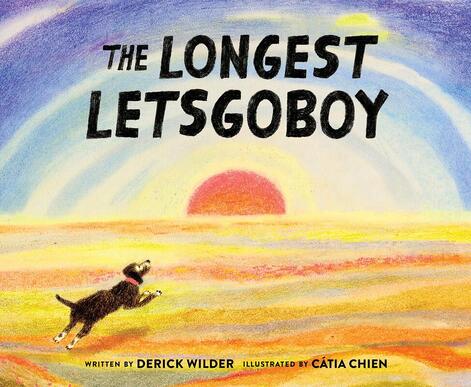 “Stunning, tender, and brilliant. Readers will laugh and cry—but most of all love.”--Kirkus Reviews, starred review

“[A]s genuinely doggy a narrative as ever there was . . . If there’s a dryeye in the house after this, check for a pulse.”--Booklist, starred review

“One not to be missed, this moving, visceral tale is a testament to the bond between a child and pet. Any person, young or old,  who has experienced loss will find this essential purchase a profound comfort.”--School Library Journal, starred review

“[The Longest Letsgoboy] is a perfect storm of tearjerk, with its supple poetry, canine narration, and picture of loss, but there’s a reassuring message about what we love remaining a part of us forever that youngsters may find find nearly as bolstering as the possibility of a new puppy.”--The Bulletin of the Center for Children's Books, starred review
This circle-of-life tale, illustrated by the amazing Catia Chien, is a testament to the enduring bond between people and their pets. It’s told from the perspective of an aging dog who knows he’s on his last letsgoboy, or walk in the woods, with his little girl. But before leaving he wants to bid farewell to his friends and make sure she will be taken care of.

This personal, semi-autobiographical story is based on Lakota, one of my Siberian huskies. He and Kaya, another husky, would often sit at my feet while I wrote on the back patio. One day, Lakota, who was already 14 years old at the time, got up and slowly began walking. I joined him, as we made our way along the edge of the woods that surround the yard. I felt like he was saying goodbye to everything around him. So I substituted my daughter as the main character and tried to put myself in Lakota's dog-world to try to figure out what he would be thinking…and The Longest Letsgoboy was born.
​
You can order The Longest Letsgoboy here
Future Titles
​
I Made Those Ants Some Underpants (Chronicle Books, spring 2023) – This humorous, rhyming tale is a follow-up to book about butts, and I’m excited to again team with K-Fai as the illustrator. The storyline follows a boy who dons his creative hat to craft custom underpants for everything around him, from race cars to robots, and cowboys to clownfish. So while the topic certainly has a silliness factor, the main character also chooses to demonstrate generosity…just in his own unique way.
Powered by